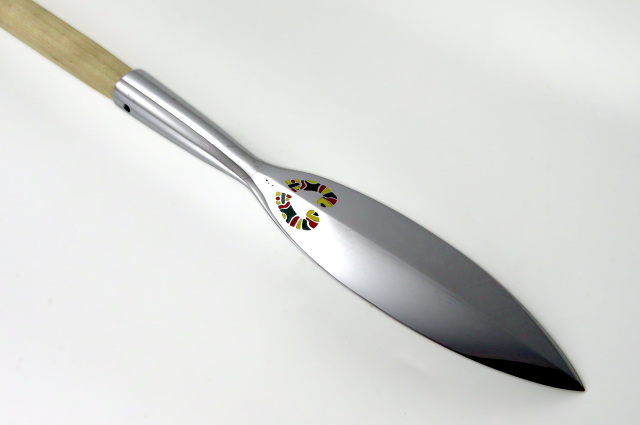 This spearhead is based on an original Anglo-Saxon piece from a Romano-British site on Lowbury Hill in Berkshire, U.K. The artifact was found with a buried individual named the "Lowbury Hill Warrior" under a late 7th century barrow. The spearhead was found along with a sword, shield, comb, hanging bowl, knife and a strike-a-lite. The spear itself was found on the left side of the warrior’s head pointing to the south. The original spearhead was likely made of either a variable-carbon steel or carburized wrought iron.

This reproduction is made from much more durable heat-treated5160 carbon steel. This type of steel is extremely popular for many modern blade smiths as it produces a durable weapon with strong cutting and flexible capabilities while being relatively easy to hot forge, finish and heat treat. The enameled multi-color decorations at the base of the blade are champlevé designs similar to that found in earler Celtic La Tène artwork as well as the famed Anglo-Saxon Sutton Hoo burial.

Sold Out
Add to Cart